Cross Country is for Wimps-or so I thought!

Growing up in suburban Long Island, as a child I was drawn to the sport of soccer. Rightfully so as I was pretty good at it. I was especially drawn to the keeper or goalie position at which I excelled at and soccer in general for years. Once in Jr. High as there were no “Middle Schools” back then I continued to play on a travel team and not for my school team. Honestly I cannot remember if we even had a JV soccer team?

Over the course of the next several years, as I entered high school I was fascinated with the more higher profile sports such as football and lacrosse. Only briefly did I give a thought of running cross country. My thought process was this ‘Cross Country is for Wimps!” and I never looked back until October 12th 2014 when I competed in my first ever cross country meet 24 years after graduating high school. Was I ever wrong about my assumption of cross country!

I’d always assumed cross country was for the nerds, geeks or the weak. How dare you call cross country a sport especially that there is no contact involved. Cross country is for wimps!

Our first ever meet was the through the newly formed Southern Tier Cross Country or “STXC” in partnership with Confluence Running of Binghamton, NY. The day's meet was held in conjunction with the Binghamton University Runners Club or “BURC Open” on University campus in Vestal.  Our competition this day would be the 5K open with about 150 runners total. 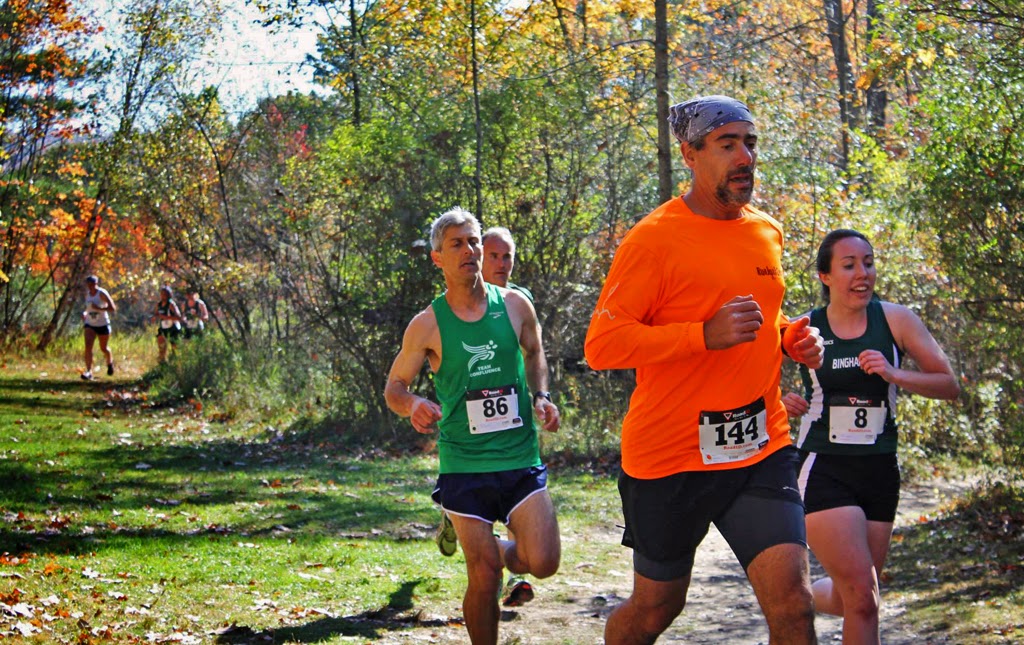 The weather was spectacular, the canopy of fall color radiated throughout the course. With gun gun going off at 11:00AM runners ascended a one mile hill called the “Pipeline” before cresting in the the Universities nature preserve. Making our way through the preserve and back out onto campus you could hear the thunderous heartbeat of the other runners. Lastly, descending the “Pipeline” back towards the finish this new thrill in my running adventure would soon be coming to a close and a new passion for sport nurtured.

Today I am eating my words. Cross country is definitely not for wimps as it takes quite the stamina to run competitively at a sustained distance. I think what really opened my eyes was my oldest son Michael who ran modified cross country for two years. The sport itself took on a different meaning for me and I saw the effort these kids put into it. Me as a runner, one who loves distance running, now knows better.
About the author:
Joe Geronimo is a father, husband, runner, photographer & throw in locomotive engineer for good measure.  He is also an active member of Triple Cities Runner's Club and Team Confluence
Share
September 05, 2014 — Matthew Gawors
Older Post Back to Runner's Lifestyle Newer Post